The 2015 Senior Bowl took place this past Saturday in Mobile, AL, as the North squad beat the South team 34-13.

College football fans were able to watch some of the top players in the nation one final time, while NFL personnel were able to further scout prospects ahead of the NFL Draft.

Let's take a look at some of the highlights from the showcase event.

— Minnesota running back David Cobb impressed NFL scouts with his strength and ability to run between the tackles, his quickness and agility to make sharp cuts, his ability to catch the ball out of the backfield and provide good pass protection. Nebraska's Ameer Abdullah and Michigan State's Jeremy Langford stood out as well, but Cobb has a chance to dart up draft boards because he has shown that he is very capable of being a three-down back at the next level. Can he actually be the first Big Ten rusher off the board? In the game itself, Cobb had 69 yards on 11 carries, including a four-yard touchdown late in the third quarter. 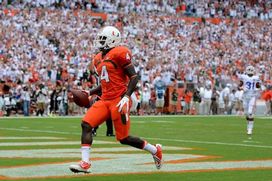 Phillip Dorsett may have been the most impressive receiver in Mobile.

— Miami (FL) WR Phillip Dorsett doesn't have great size, but he displayed his explosiveness all week. He runs good routes, has very good speed and made some tough catches. He was the most outstanding receiver in Mobile, although Tyler Lockett of Kansas State, Justin Hardy of East Carolina and Duke's Jamison Crowder had a solid week too. However, Stanford's Ty Montgomery really struggled with drops during practices last week.

— Dorsett wasn't the only impressive former Hurricane last week. Tight end Clive Walford, middle linebacker Denzel Perryman and cornerback Ladarius Gunter all had really strong showings in Mobile. With the talent that the 'Canes had in 2014, how were they only able to win six games? It's head-scratching, which just makes head coach Al Golden's seat a bit warmer heading into next season.

— It is in former Auburn star Nick Marshall's best interest to make the move from quarterback. He had an up-and-down week in Mobile at cornerback because he is playing a position now that he hasn't played since when he was at Georgia. But he has an ideal frame for the cornerback position and seems willing to put the hard work in, so he has a chance to make a move up draft boards if he improves technically on a daily and weekly basis. Marshall had five tackles for the South team on Saturday, which tied for the game high.

— If there were concerns as to whether Utah's Nate Orchard was just a pass-rusher, he showed that he is not a one-trick pony. He played well on Saturday standing up in the 3-4 scheme. He isn't a big-bodied defender, but he moved well on passing plays and was solid against the run.

— Remember this name: Miami (OH) cornerback Quinten Rollins. The former point guard has just one year of college football experience with the Redhawks, but he had seven interceptions this past year and had a very strong week in Mobile, highlighted by a pick in the game on Saturday. He has very good athleticism and natural ball skills, so he will be highly targeted in this spring's draft.

— There's buzz that Washington defender Shaq Thompson could ultimately end up at running back, a position he played and excelled at during his college career. The linebacker product has the size and athletic ability to play safety, but some teams are 'wowed' by his freakish athleticism, so running back is not out of the question.

— He is small in stature, but TCU's Kevin White has the skills to succeed at either cornerback or nickel back. He had a strong showing in Mobile, which was highlighted by an interception in Saturday's game.

— This isn't a strong senior quarterback class at all. The six signal-callers in town did not do much to impress scouts, but Colorado State's Garrett Grayson is intriguing. The National Football Post's own Greg Gabriel wrote up Grayson after seeing him in Mobile, and there's a stronger belief now that Grayson can develop into a soild signal-caller if he can continue to fine-tune his mechanics. He has nice size, good arm strength, makes good decisions and has good athleticism. He really shined in his final college season as he mastered Jim McElwain's offense. In the actual game on Saturday, Grayson completed 8 of 15 passes for 118 yards. Meanwhile, Baylor's Bryce Petty lost out on an opportunity to show that he could adjust to a pro-style system and be the clear-cut No. 3 signal-caller in the draft. Accuracy remains an issue for the former Bear.