Shortly after the College Football Playoff national championship game, I argued that Braxton Miller should take a long, hard look at moving onto Oregon as a graduate transfer. Of course, the Ohio State quarterback will be locked in a three-way battle at the position this offseason if he returns to Columbus.

Now, it appears that another intriguing candidate has emerged for the Ducks as a possible replacement for Heisman Trophy winner Marcus Mariota. 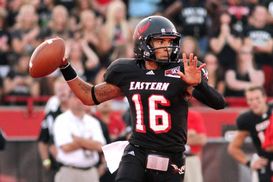 Could Vernon Adams Jr. be on his way to Eugene?

Eastern Washington's Vernon Adams Jr., who is slated to graduate in June, told The Spokesman-Review in Spokane that he has a scholarship offer from Ducks head coach Mark Helfrich and plans on visiting Eugene this weekend. Adams would be eligible to play for the Ducks in 2015.

Adams is no stranger to Pac-12 competition. In 2013, he passed for 411 yards and four touchdowns and ran for the game-winning touchdown to lead EWU to a three-point upset of then-No. 25 Oregon State on the road. This past fall, Adams torched the Washington secondary for 475 yards and a school single-game record seven touchdowns in a near-upset on the road. In those two games against Pac-12 squads, he went a combined 54-of-76 passing for 886 yards with 11 touchdowns and zero picks (plus two rushing scores). Quite simply, he is a big-time talent.

The California native has a good arm, elusiveness and is one of the nation's most exciting players. If he was to land in Eugene, he would compete with Jeff Lockie, who was this year's backup, Georgia Tech transfer Ty Griffin, redshirt freshman Morgan Mahalak and Class of 2015 California dual-threat Travis Waller, a U.S. Army All-American Bowl participant who has been given high praise by a wide range of recruiting analysts not just for his running ability but for his accurate passing as well. If Adams was to head to Eugene and compete, he would be vying to start the season opener against none other than Eastern Washington.

With the Eagles, the 6-foot, 200-pounder has completed nearly 65 percent of his passes for 10,438 yards and 110 touchdowns against 31 interceptions. He has also rushed for 1,232 yards. He was named the runner-up for the Walter Payton Award, which is the FCS equivalent to the Heisman Trophy, in 2013 and finished second again last season despite missing time with a broken foot.