While the Sunday live chat is no more, I’m still available to answer any and all fantasy questions throughout the week on twitter @JoeFortenbaugh if you use the hashtags #FSTLV and #GMCFF. Fire over some good ones and they just may end up on the Fantasy Sports Network Sunday morning between 10:00am-12:00pm eastern.

--At this point in the season, I really have no clue which teams you guys have left to use in survivor. So rather than throw out what will likely amount to repeat selections, hit me up on twitter @JoeFortenbaugh and we can talk it through from there. Best of luck!

FADE OF THE WEEK

Analysis: Like clockwork, the Miami Dolphins are once again tanking at the end of the season, as Joe Philbin’s team has dropped three of its last four contests and is averaging a paltry 14.0 points per game over its last three outings. On the flip side, rookie quarterback Teddy Bridgewater and the Minnesota Vikings have come on strong during the second half of the season and have now covered the number in four straight matchups. Take note that while Minnesota is 10-1 ATS over its last 11 games played in the month of December, Miami is 0-5 ATS over its last five games played in the month of December.

Two weeks left for the Big Puma and I to get our squad above .500 so we can save some face entering the 2015 season. Here’s the rundown for Week 16:

CLICK HERE to check out all of the current lines.

Kyle Orton, QB, Buffalo Bills (at Oakland): Orton hasn’t exactly set the league on fire since taking over for former first-round draft pick E.J. Manuel in Buffalo, but he has helped guide the Bills to an 8-6 record and an outside shot at a postseason appearance. Those of you who are jammed up at the quarterback position in Week 16 should give this guy a good, long look, as the Raiders just surrendered 297 passing yards and two touchdowns to game manager Alex Smith last Sunday. Knowing the Bills, this will be a tight game entering the fourth quarter, which means Orton should rack up plenty of passing attempts against a defense that is permitting an average of 27.2 points per game this season (30th in NFL).

Mark Ingram, RB, New Orleans Saints (vs. Atlanta): Ingram has found the end zone just one time over his last six outings, but owners should expect that streak to come to a close Sunday against a dreadful Falcons defense that is surrendering more fantasy points to opposing running backs this season than any other team in the league (24.2 pts/gm). Not only is Atlanta the lone NFL defense giving up over 400 yards of offense to opponents this season (409.9 yds/gm), but this unit has also permitted six rushing touchdowns over its last three starts. 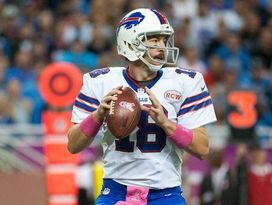 Orton has a tasty matchup on deck against the Oakland Raiders.

Steve Smith, WR, Baltimore Ravens (at Houston): Smith has found the end zone in two of his last four starts and should provide a solid stat line for owners Sunday in Houston against a Texans defense that currently ranks 26th in the NFL against the pass (257.1 yds/gm) while giving up an average of 26.8 fantasy points per game to opposing wide receivers this season (third-most in NFL). In addition, be advised that the Houston secondary has permitted at least two touchdown passes in nine of its last 12 outings.

Tre Mason, RB, St. Louis Rams (vs. NY Giants): The rookie from Auburn is purely a situational start based on his matchup, as the St. Louis offense can’t be trusted to move the football with any sort of regularity on a consistent basis. That being said, Week 16 offers up a tasty matchup for Mason against a Giants defense that currently ranks 30th in the NFL against the run (135.1 yds/gm) while surrendering an average of 20.7 fantasy points per game to opposing running backs this season (eighth-most in NFL). As a bonus, St. Louis has had ten days to get ready for this matchup.

Jeremy Maclin, WR, Philadelphia Eagles (at Washington): Last Sunday’s home loss to the Cowboys has the Eagles on the outside looking in at the 2014 playoffs, which means this team needs to rally in a big way Sunday against a highly dysfunctional Washington Redskins team. With just two games remaining in the season, the Redskins are surrendering an average of 26.4 points per game on defense (28th in NFL) and 25.7 fantasy points per game to opposing wide receivers (fifth-most in NFL). In addition, note that Maclin caught eight passes for 154 yards and a touchdown when these two squads got together back on September 21.

Travis Kelce, TE, Kansas City Chiefs (at Pittsburgh): The two-year veteran has come on strong the last two weeks, catching 12 passes on 15 targets for 169 yards and a touchdown. Kelce has tremendous upside, but working within the limited confines of the Kansas City offense, it’s unclear if we’ll ever see the Cincinnati product hit his true ceiling. Either way, Week 16 presents a favorable matchup against a Pittsburgh defense that is surrendering an average of 8.9 fantasy points per game to opposing tight ends this season (eighth-most in NFL). Note that the Chiefs have made an effort to get this guy more involved in the offense over the last two weeks and it’s starting to pay dividends.

San Diego Chargers, D/ST (at San Francisco): Banged up and struggling, the San Diego defense enters a highly favorable matchup Sunday in Santa Clara against a 49ers offense that has scored 17 or fewer points in seven of its last eight games with 13 turnovers and 36 sacks. And with Jim Harbaugh on his way out the door and the team officially eliminated from playoff contention, motivation is an element that could be lacking come Saturday night at Levi’s Stadium.

Philip Rivers, QB, San Diego Chargers (at San Francisco): Wide receiver Keenan Allen and running back Ryan Mathews are out, the offensive line has been playing suspect football at best and Rivers has thrown just seven touchdown passes over his last seven starts. That makes for a bad combination of factors against a 49ers defense that is permitting an average of just 17.1 fantasy points per game to op posing quarterbacks this season (third-fewest in NFL).

Arian Foster, RB, Houston Texans (vs. Baltimore): Foster is battling a hip injury and faces a Baltimore defense on Sunday that may stack eight defenders in the box in an effort to dare fourth-string quarterback Case Keenum to beat them through the air. And as if that wasn’t daunting enough, take note that the Ravens currently rank third in the NFL against the run (84.3 yds/gm) while surrendering fewer fantasy points to opposing running backs than any other team in the league (12.5 pts/gm). 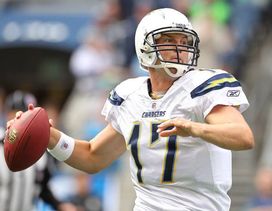 Michael Floyd & Larry Fitzgerald, WRs, Arizona Cardinals (vs. Seattle): This is a bad situation all the way around for the Arizona offense, as the Cardinals are now down to third-string quarterback Ryan Lindley thanks to injuries sustained by both Carson Palmer and Drew Stanton. In addition, this is without question the worst matchup on the board for Lindley, as the Seattle defense currently ranks first in the NFL against the pass (184.3 yds/gm) while giving up fewer fantasy points to opposing wide receivers than any other team in the business (14.0 pts/gm). Owners need to activate Plan B in a hurry.

Matt Forte, RB, Chicago Bears (vs. Detroit): Arguably the most underrated running back in the league, Forte has found the end zone just once over his last three starts and will be playing on an offense this Sunday led not by starting quarterback Jay Cutler, but by the highly unpredictable Jimmy Clausen. So not only is the signal-caller switch a huge blow to Forte’s overall value, but note that Detroit currently ranks first in the NFL against the run (63.8 yds/gm) while permitting an average of just 14.3 fantasy points per game to opposing running backs this season (fifth-fewest in NFL).

Michael Crabtree & Anquan Boldin, WRs, San Francisco 49ers (vs. San Diego): 49ers quarterback Colin Kaepernick is in the midst of one of the worst regressions we’ve seen from a signal-caller in quite some time. The Nevada product is playing behind a terrible offensive line, has no confidence in himself and lacks the touch necessary to make some of the more complicated throws in the National Football League. As a result, the San Francisco offense has scored 17 or fewer points in seven of its last eight games and boasts a passing attack that ranks 28th in the NFL (198.7 yds/gm). No sense in starting either one of these receivers on championship weekend.

Greg Olsen, TE, Carolina Panthers (vs. Cleveland): One of the few bright spots on the Carolina offense this season, Olsen has racked up 20 receptions on 24 targets for 182 yards and a touchdown over his last two starts. However, that stat line came against two of the worst defenses in the league in New Orleans and Tampa Bay and Week 16 offers up a much more challenging situation against a Cleveland Browns team that is permitting an average of just 5.5 fantasy points per game to opposing tight ends this season (fifth-fewest in NFL). Olsen isn’t the worst option on the board for Week 16, but his upside is severely limited.

Cincinnati Bengals, D/ST (vs. Denver): We like the Bengals to upset Denver Monday night in Cincinnati, but not enough to justify starting this defensive unit against Peyton Manning and breakout running back C.J. Anderson. Owners in need of a better option should look to Minnesota and Miami.