Before I head to Indianapolis for the NFL scouting combine, I always go back and check out my notes from the Senior Bowl. Which players stood out? And who can boost their draft stock even more by testing well on the field in Indy?

Here are five prospects I will be watching during drills as the draft process rolls on at the combine: 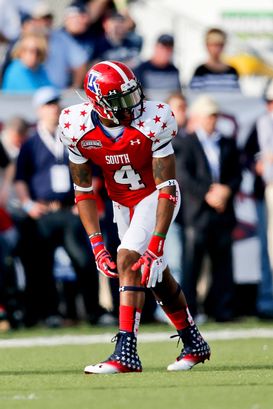 US PRESSWIREAfter a solid week at the Senior Bowl, Patton can continue to drive his draft stock with a strong workout at the combine.

1. Quinton Patton, WR, Louisiana Tech: Patton was in the mix with a talented group of WRs down in Mobile that included Markus Wheaton (Oregon State), Chris Harper (Kansas State) and the speed of Marquise Goodwin (Texas). Patton ran smooth routes, showed the ability to win on the double-move and finished consistently down the field on the deep ball. Now I want to see him run and compete in drills at the combine. The 40-yard dash carries weight at the WR position. We all know that. And coming off his performance in front of scouts at the Senior Bowl, a strong workout can move the Louisiana Tech product up the board.

2. Lane Johnson, OT, Oklahoma: Luke Joeckel (Texas A&M) is projected to be the first OT off the board (possibly going No.1 overall) and Eric Fisher (Central Michigan) should be next in line this April. But don’t forget about Johnson. Talking with scouts at the Senior Bowl, the key with the Oklahoma product is the athletic ability he brings to the position. You could see that on the practice field with his footwork. In Indianapolis, Johnson has a great opportunity to showcase that athletic skill set during drills and possibly lock up a spot in the Top 15.

3. Desmond Trufant, CB, Washington: I always watch DBs closely in Mobile and Trufant was the best corner I saw on the field. Quick feet with the ability to open the hips and drive on the ball. Plus, he played with some swagger during one-on-one drills. Scouts will want to get a 40 time on Trufant and they will also grade his technique along with the ability to transition with speed. Corner is a prime position in the NFL and teams are always looking to make upgrades in the secondary. Trufant can earn some money at the combine.

4. Ezekiel Ansah, DE, BYU: There is no question the BYU product needs pro coaching. Watching him during one-on-one work at the Senior Bowl, the DE/OLB has to improve his technique at the point of attack and develop some counter moves outside of a speed rush. However, that will come once he starts to see reps in the NFL. And he has that raw talent clubs are looking for in an edge rusher. Ansah should post some impressive numbers at the combine.

5. Jonathan Cyprien, SS, FIU: The strong safety already has an NFL body, plays physical and had a good week in Mobile from my perspective. Scouts I talked to see Cyprien as an “in the box” player at the next level, but he will get the opportunity to display his range on deep ball drills at the combine. Remember, you don’t need 4.4 guys at the safety position. Anything in the 4.5 to 4.6 range sells when you find a safety that displays solid angles to the ball and shows some range from a deep middle of the field alignment. Let’s see how the FIU product compares to Kenny Vaccaro (Texas), Matt Elam (Florida) and Eric Reid (LSU) in Indianapolis.