Click here for the entire Inside the Playbook series.

Over the weekend I was asked a question on Twitter: what is the toughest route to defend? That’s an easy one for any safety to answer: 4 Verticals. Why? Think of the stress the concept puts on Cover 2 (2-on-1 vs. the 2-deep safeties), Cover 3 (2-on-1 vs. the FS) or Cover 4 (SS, FS have to match and carry No.2 vertical from inside alignment).

Before we get into the All-22 tape and breakdown Joe Flacco’s last minute TD pass in regulation, here is a basic, static look at 4 Verts vs. Cover 2 on the chalkboard. 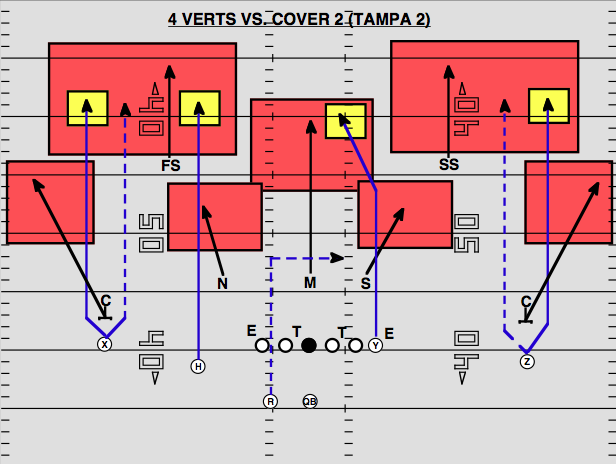 A couple of quick notes…

- I have both CBs playing a standard Tampa 2 technique: jam and sink. You want to take some stress off the safety (jam, re-route No.1) and allow the deep half player to stay on top of his landmark (top of the numbers). Force an inside release, sink and trail No.1 (until threatened in the flat).

- Why do you want to force the inside release? If your CBs play with a “soft squat” (no jam, sink at the snap) and allow the WR to take a hard, outside stem it can widen the safety off the top of the numbers landmark. That opens up a clear throwing lane to the inside seam (No.2).

- The safeties have to gain enough depth to play over the top of No.1 and overlap any throw to the middle of the field. Remember, you want to see downhill angles from your safeties in Cover 2.

Let’s move over to the All-22 and check out why Jones was able to get free vs. Denver’s Cover 2… 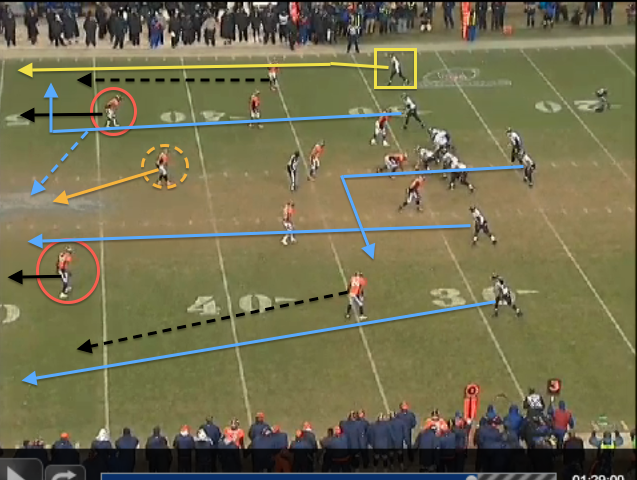 - NFL offenses will run 4 Verts out of 2x2 alignment and a 3x1 alignment (called a “999” route with No.3 working back across the field). But given the game situation in Denver, this 2x2 alignment should be an automatic alert for 4 Verts from a defensive perspective. Both No.1 WRs will take an outside release (vs. a “soft squat” technique) with the TE and the open (weak) side slot WR pushing up the field on the inside seam routes. The RB will “check release” to the open side flat.

- The Broncos are playing Cover 2 out of their sub-package with a 3-Man rush. This looks similar to a scheme I call “Tent” of “Tent Robber” with the Mike (DB in the game) aligned deep off the ball and playing the inside vertical seam (alomst a 3-deep look). Both CBs will sink/trail under No.1 and the safeties will get depth. 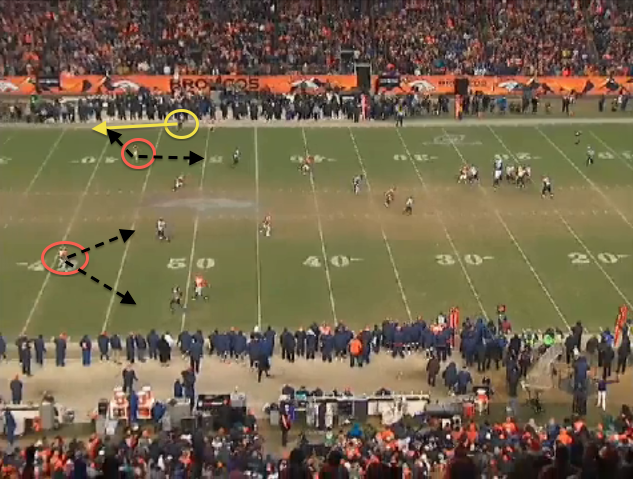 - This is where SS Rahim Moore gets into trouble. With Flacco stepping up in the pocket, the Broncos safety opens his hips to No.2 (TE). Remember, he has help vs. No.2 with the Mike playing to the inside of the TE. Moore needs to stay square in his pedal and continue to gain depth. This is all about angles. Maintain depth and put yourself in a position to play over the top of both No.1 and No.2. 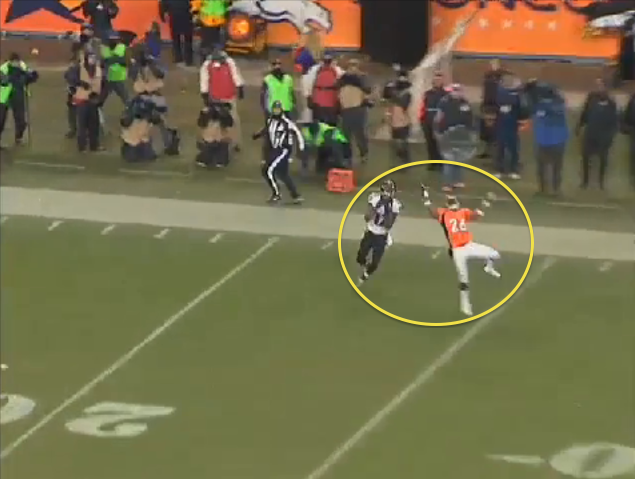 - Instead of taking a downhill angle on the throw (don’t break from the deep half until the QB throws the ball), Moore now has to flip his hips (called an open angle technique); transition and work back to No.1. That takes time and doesn’t allow Moore to create a positive angle to Jones on the deep 9 (fade) route.

This is different than the chalkboard drawing I put up because the Broncos are protecting a lead late in the ball game with an opportunity to close it out. The dig, curl, comeback, etc. won't beat you in this situaiton--but the deep ball will. No need to gamble or guess as a deep half safety. However, the techniques of the defense don’t change at the safety position when playing Cover 2 vs. 4 Verts.