Moving beyond the Superdome blackout, let’s get into the Ravens’ 34-31 win over the 49ers in Super Bowl XLVII. My game notes before I take a closer look at the All-22 tape later this week. 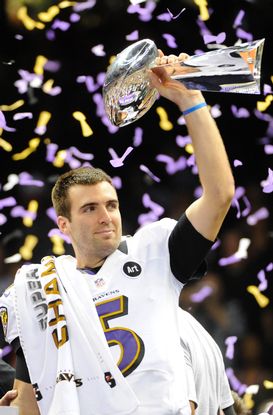 Flacco wins the MVP award: I can’t argue with Flacco taking home the trophy after his production tonight (22-37-287-3TDs). He was able to navigate the pocket, work the TE position in the middle of the field, make throws in the red zone and protect the football. And I love the confidence to check to the back-shoulder fade on 3rd and short late in the game. Throughout this playoff run, Flacco was consistent in his play at the QB position throwing 11 TDs and zero interceptions. Not bad for a guy that is going to get paid big money in a contract year.

The “no-call” in the red zone: I will always come to the defense of the secondary when we talk about physical play and some contact on the release (or through the route stem). However, I can see why Jim Harbaugh had a serious issue on the fade route to Michael Crabtree vs. Jimmy Smith. As a DB, you can get away with a hold if you keep your hands inside of the shoulder pads from a press-alignment. But when you grab outside of those pads (as we saw with Smith on the release), that’s a call the refs probably should make. Rough night all around for the officiating crew down in New Orleans.

Ravens’ Cover 0 pressure: In two key situations (2 point play and the 4th down fade route), Baltimore played “zero-pressure.” Think of man-pressure with no safety help in the middle of the field. That’s smart football. Play with inside leverage and force the QB to throw the slant or the fade. This allows you to dictate the game situation from a defensive perspective.

49ers’ red zone play calling: San Francisco had something going when they burned a timeout on 3rd down (QB Counter Lead) in that final series, but I have to question the play coming off the timeout (quick flat route out of a bunch alignment) and the 2nd down call to run the Flat-7 (Sprint action). That’s a situation where you can throw inside breaking routes (Hi-Lo for example) or line up and go with the base downhill run schemes before throwing the fade on 4th down.

Kaepernick: The 49ers’ QB didn’t look comfortable early in that ballgame. He was late on some of his reads and missed on the deep inside cut to Randy Moss. However, he played with much more control as the game progressed. Look at the 3-level route concepts, the dig routes, the reads he made on the option scheme and the ability to break contain. The young QB put up big numbers (16-302-1TD-1INT; 7-62-1TD) in the loss.

Jacoby Jones: Can you make a case for Jones to win the MVP award? The kickoff return for a score and the double-move vs. Chris Culliver were two plays that we will remember from this Super Bowl. And the finish on the TD catch was just as good as the route.

The TE position: Production from both clubs. Pitta, Dickson, Davis and Walker. And it was Walker that also showed up in the run game plus covering kicks on special teams. Think matchups here when we talk about the TE position and the ability to beat Cover 1 (man-free) or work vs. LBs in both 2-Man and zone schemes.

Boldin shows up again: It’s been the same drill all post-season for Boldin in the red zone. Inside alignment, work the seam or the middle of the field. On the TD catch, Boldin stemmed his route to the Mike Backer (creates a one-on-one matchup) and then finished up the field vs. Cover 2. We could also look at the back-shoulder fade on 3rd down, the quick underneath concepts or the ability to convert a broken play with Flacco outside of the pocket. The key with Boldin: strong at the point of attack. He has no issues climbing the ladder and taking the ball away from a DB.

Pitta’s TD: Why did SS Donte Whitner jump outside vs. the TE in the red zone? Think like a DB here expecting to see the 7 (corner) route. Whitner over-played the route, worked to an outside alignment and that allowed Pitta to sit down in the end zone. It doesn’t have to be complicated inside of the red zone.

Ray Lewis gets another ring: I know the veteran LB didn’t have a great night. Lewis struggled to match up to Vernon Davis and he didn’t produce any impact plays throughout the game. But he retires with two Super Bowl rings—and he’s going to Canton. 17 years. That’s a heck of a career.