Let’s get into some personnel, matchups and game plans as we look ahead to Super Bowl XLVII in New Orleans. Here are five things I will be watching on Sunday night when the 49ers and Ravens take the championship stage. 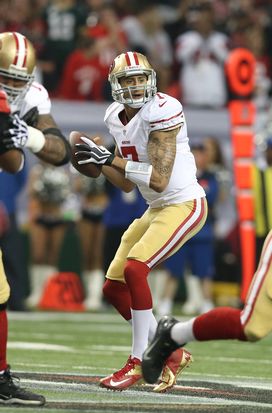 US PRESSWIREKaepernick and the 49ers will run multiple schemes from the Pistol formation.

1. 49ers’ Pistol formation: I would expect the 49ers to test the discipline of the Ravens’ defense with Colin Kaepernick in the Read Option scheme, but we also have to remember that Jim Harbaugh's offense will run the Power O, Counter OF, etc. from the Pistol formation. And that leads to play action opportunities. Think of schemes that will test the run/pass keys of the Ravens’ back seven and put some stress on the linebackers. Can’t stick your eyes in the backfield and expect to take away the intermediate route tree vs. play action.

2. The tight end position: How will these two defenses game plan Vernon Davis and Dennis Pitta? The 49ers' TE has been targeted during the playoff run on the Hi-Lo concepts, the deep 7 cut, seam, wheel, etc. With Pitta, we are looking at a tight end that is underrated from my perspective and a key part of the Ravens’ offense inside of the numbers. We could see some 2-Man on Sunday night and that puts the LBs in a tough spot to matchup vs. the TE position. There will be opportunities for both Davis and Pitta to make impact plays.

3. Aldon Smith’s production: Smith hasn’t recorded a sack over the last five games and the 49ers need that production to collapse the pocket vs. Ravens’ QB Joe Flacco. With Smith drawing the matchup vs. Bryant McKinnie, the OLB must lean on speed and the ability to set up the Ravens’ LT. Can’t beat McKinnie with straight power moves. Smith has to get the LT off-balance, attack the edges and put the QB on the ground.

4. Safety play: Physical safeties that will put a helmet on you. That’s what I see with Reed, Pollard, Goldson and Whitner. All four will hit and they play the position with a physical style that shows up when you turn on the film. On Sunday night, watch for their ability to drive on inside breaking routes, add to the blitz front and drop down to fill vs. the run. And in a matchup where the tempo could be dictated by the run game, these safeties will be key to limiting plays that break to the second level of the defense.

5. Boldin vs. Rogers: This is the matchup I would expect to see when the Ravens move Boldin inside with their Posse personnel (3WR-1TE-1RB) on the field. The WR has been productive throughout the post-season in the red zone because of the ability to win on the release and stack on DBs within the route stem. But that’s why I like the idea of the 49ers using Rogers. The CB is physical, will use his hands on the release and can match Boldin in pressure situations. Limiting Boldin on 3rd downs and in the red zone will be crucial.