Why you should embrace the NFL combine

There is an overwhelming opinion that the NFL scouting combine is a wasted step in the long and tiresome draft process.

I can see why that opinion could exist—to a degree. 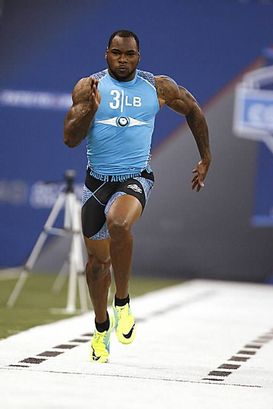 The NFL scouting combine is a three day job interview for rookie prospects.

Rookie prospects testing on the field in the 40-yard dash, short shuttle, vertical jump, etc. No pads. No game situations. Just guys running around in static drills that they train for months in advance.

Think about it. This is a take-home test. And prospects shell out big money (via their agents) to train at elite facilities around the country. The powerful start in the 40, the manicured steps in the short shuttle and the technique of the 3-Cone. That’s all practiced from the end of bowl season until now. Daily repetition designed to master these drills before they even count.

Those drills don’t tell us much about these prospects as football players. Nope. We get numbers from the combine. Numbers from guys in shorts. That’s it.

However, I still value the combine and see it as an important tool in the process.

I was gassed after the final drill inside of the RCA Dome back at the 2000 combine. My legs were tight, my back hurt from the turf and the stress of the three-day tour in Indy finally caught up with me. I was ready to get to the airport, head back to Iowa City and grab a Busch Light. Time to sit down for a minute. Heck, time to clear my mind.

The combine isn’t designed to be comfortable for these prospects. And it shouldn’t be. It’s a job interview. Remember that. Fly in and go through two days of interviews, bizarre written exams, medical testing, more interviews, the weigh-ins, bench-press, etc.

Then get ready to actually run on the third and final day in town.

That’s not easy. Trust me. These guys will be nervous when they set their hand down on the line, take a rehearsed stance and explode into the start of the 40-yard dash. Run hard. Run fast. That’s the goal. You get two chances to run the 40. So make them count. No stress there, right? And that can be applied to every drill on the field.

I don’t expect prospects to post their best times at the combine. That’s saved for the Pro Day when you can dress in your own locker room on campus and run in that comfortable environment. Easy work right there.

But not in Indy. No chance.

And that’s the reason I will always value the combine and the impact it has on rookie hopefuls. Put these prospects in an adverse situation and tell them to run, jump and do drills in front of the league’s top brass when they are stressed out and tired.

You can find out a lot about these guys in Indy. From the interviews to the workouts on the field, the NFL sends these young players through a series of tests. It’s a grind. A brutal grind at times. Just ask one of these prospects when the combine finally wraps up. They will tell you all about it.

And if I’m a scout, that’s exactly how I want it. Who can perform when the pressure is turned up in Indianapolis? We will find out soon...