Kendall Wright and the Tennessee Titans have finally agreed to a deal, a league source tells TitanInsider.com.

The holdup in Wright's deal had been the amount of guaranteed money the receiver would get in the fourth year of his contract, and whether or not offset language would be included in the deal. Wright was the 20th pick overall, and last year, Tampa Bay fully guaranteed No. 20 pick Adrian Clayborn's deal as it was the first contract completed in the first round. Contracts above and below Clayborn were not fully guaranteed.

However, numbers-wise, based on Clayborn's deal, Wright can expect around $8.2 million with approximately $4.47 million in a signing bonus.

The Washington Redskins bulked up on the offensive line by signing veteran tackle Jordan Black.

The Redskins have been thinned out some upfront already with right tackle Jamaal Brown rehabilitating his surgically repaired right hip. Left guard Kory Lichtensteiger is on the shelf until the start of the regular season after he had arthroscopic knee surgery to remove some cartilage, according to the Washington Post.

Black sat out last season after he was released by the New Orleans Saints at the end of the summer. He last played for the Jacksonville Jaguars in 2010. The veteran has 40 career starts and spent most of his time with the Kansas City Chiefs.

The Denver Broncos and left tackle Ryan Clady have broken off talks on a new long-term extension for the time being, says the Denver Post.

It means Clady will play for the $3.5 million he is due this season in the final year of his rookie contract. The two sides hope to resume the negotiations after the season is over.

It also opens the door for the Broncos to apply the franchise tag to Clady if they cannot reach a deal with him during that time frame.

In its last year in Conference USA before making the move to the Big East, Central Florida will be shut out of a bowl game.

According to ESPN.com's Andy Katz, the NCAA has handed down a one-year postseason bowl ban to the football team while also giving the men's basketball squad a postseason ban of a year due to recruiting violations in the programs.

The basketball team, led by stars Keith Clanton and Marcus Jordan, will not be able to play in the conference tournament in Tulsa, either. The star duo can play immediately if they choose to transfer out of UCF.

For head football coach George O'Leary, it's a tough break for a team that was considered one of the favorites in C-USA this fall. The team, which cannot play in a potential league championship game either, will be eligible for postseason play next year when it makes its Big East debut.

The NCAA will officially announce the sanctions later this morning. UCF went in front of the Committee on Infractions in April following allegations that the school was involved with runners for sports agents and cash payments as well as gifts to recruits.

Detroit Lions general manager Martin Mayhew says he is “very comfortable” that running back Jahvid Best will eventually be cleared to return from a concussion.

But Best isn’t on the field yet and the club has no timetable for his return. Mayhew had been on the record this spring saying he expected Best to be available when training camp opened.

“It’s up to the medical professionals to decide when he’s going to be available,” Mayhew said, according to Dave Birkett of the Detroit Free Press. “Eventually he will get cleared. I’m very positive.”

Mayhew admitted he was “a little bit surprised, a little bit disappointed” that Best remains on the sideline but says he isn’t to the point where the club will begin looking at running backs on the street. Mayhew said he’s had a conference call with 20 doctors to determine what the proper course of action is with Best, who had a serious concussion while he was at Cal. Best had two concussions last year.

“The medical professionals have to determine what makes him cleared,” Mayhew said.

The Philadelphia Eagles could be without defensive end Jason Babin for the remainder of training camp.

That means he’ll be back in plenty of time for the season opener but the Eagles will likely be cautious with him because they will not want him to re-injure his leg and then jeopardize real games in September.

The Philadelphia Eagles already had Riley Cooper go down with a fractured collarbone that required surgery and will keep him sidelined about six weeks.

Now, the team must handle a more serious injury to another wide receiver. Ron Johnson, who was on the club’s practice squad for most of last season, suffered a gruesome dislocation of his right ankle as well as a fracture during 7-on-7 drills. He could very likely require surgery, according to Les Bowen of the Philadelphia Daily News.

Johnson had a solid spring and was impressing onlookers.

“I really like him,” Eagles coach Andy Reid said. “He's been coming on since we got him. He's been improving every day. He worked out all offseason like a wild man. You hate seeing that. He's a great, great kid and a good player, too. He's a phenomenal player. He really had a chance to do something with our football team. It's tough. This is going to be a setback for him, but he's a battler, and he'll battle through it. It's hard. That's the toughest part about the game.”

Click here for the entire Inside the Playbook series

Click here for a breakdown of the NFL route tree.

When the DBs and WRs line up to compete in one-on-ones during an NFL training camp practice, forget about looking for big plays and focus on technique with both sides of the ball. Off-man and press coverage vs. the entire route tree. And here are the five things you should be watching… 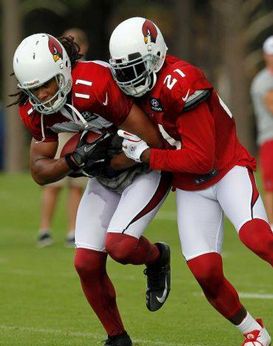 WRs need clean angles back to the ball in one-on-one drills to create separation.

1. DB plant and drive: If the offense wants to “win” the drill and throw the 3-step game (slant, hitch, quick out) vs. off-man, then look for the DBs ability to drive the route. Read through the 3-step drop (also called a “flat-foot” read), plant and break at an angle that allows the DB to attack the upfield shoulder. Look for controlled footwork here with a burst that brings the defender back downhill to the ball carrier.

2. WR vs. press-coverage: Can the WR win at the line of scrimmage? Watch their lateral movement on the release (force DBs to “open the gate”) and their hands. Young WRs will open up their bodies on the release and get jammed up if they don’t use a counter move to create space and win based on the DB’s leverage. Be physical as a wide out, use your upper body strength and fight through the press-coverage.

3. Route break: Is it smooth or choppy? You don’t want to see a WR round his cuts and allow a DB to break in front of the throw. Balance throughout the route stem, lower body control and a sharp angle. This is how you create separation back to the ball and use leverage to win.

4. DB technique/eye placement: If a DB gets beat, where are the technique errors at the top of the route stem? Does he lose his cushion (distance between DB and WR), step “in the bucket” (step behind on the break) or take his eyes off the WR (looking in at the QB) when he drives the route? Poor technique and eye placement are always the reason DBs get beat in one-on-ones. Play with solid footwork and put your eyes in the right place if you want to win in this drill.

5. Playing the ball: Who wants to finish the play? I can talk about footwork and angles all day, but this is still about competition. In one-on-ones you will find out who wants to attack the ball at the highest point, play the “pocket,” etc. And in full gear, there is nothing wrong with some contact when two players are fighting to win this drill. Have to show the ability to find the ball and finish.

Indianapolis Colts linebacker A.J. Edds left the field with a knee injury during Monday's practice, and indications are the injury may be serious.

There is speculation that Edds may have suffered a torn anterior cruciate ligament, in which case he would need surgery and probably be lost for the season.

Edds appeared in 11 games between the Colts and New England Patriots last season.

The New York Giants were hit with significant injuries early last year and now the team has a concern on its hands.

Cornerback Terrell Thomas, who suffered a torn ACL in his right knee in a preseason game last summer against the Chicago Bears, has re-injured the knee and it involves the ACL. Ralph Vacchiano of the New York Daily News reports Thomas was sent back to New York from training camp in Albany to be evaluated, and now Thomas will have arthroscopic surgery to determine the damage and the next step.

Thomas got tangled up with wide receiver Domenik Hixon in practice on Sunday and on Monday he had swelling in the knee. Obviously, this could be a significant setback for Thomas, who had vowed to reclaim his starting job.

The Giants signed Thomas to a $28 million, four-year extension during the offseason but the club has ample protection. The only guarantee for Thomas in the deal was a $1 million signing bonus.