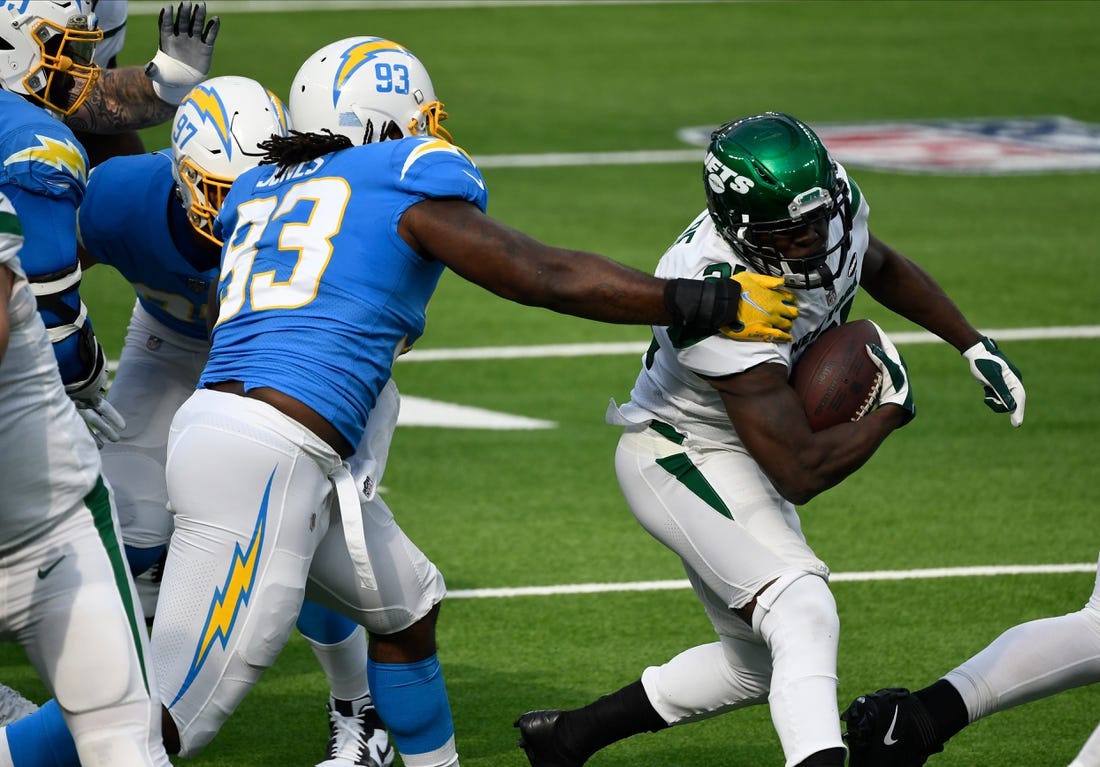 Police there said Tuesday that officers responded to a call at the Tropicana Atlantic City and found a 28-year-old Miami woman speaking with hotel security. According to a police department news release, the alleged victim “did not exhibit signs of injury” and no complaint was filed at the time.

A police investigation that followed, however, resulted in charges against Gore, the NFL’s No. 3 all-time rusher with 16,000 yards.

Gore, 39, was issued a police summons to answer the charge at a date in the future.

While the police news release didn’t offer any specifics about the alleged assualt, TMZ reported Wednesday that court documents said Gore grabbed the woman by the hair and then began “violently dragging her nude person” in a hallway on the 59th floor.

In June, Gore signed a one-day contract with the San Francisco 49ers to retire as a member of the franchise.

New York Giants Hall of Fame linebacker Harry Carson bet the New York Yankees to win the 2019 World Series on Tuesday morning, the first wager at DraftKings Sportsbook located at the Resorts Casino in Atlantic City.  It’s DraftKings’ first physical location in New Jersey and the first on the East Coast, as the Boston-headquartered company continues its push from an online-only operation into physical spaces.

The sportsbook is the second of two at Resorts. The first is Resorts-branded, run by SB Tech and opened earlier this summer.

The new sportsbook features 135 50-inch televisions and a video wall that is more than 1,000 square feet. Rows of club chairs sit in front of the video screen, with a bank of teller windows to the right, and a VIP Lounge to the left. According to the Nov. 14 DraftKings press release, the facility has five teller windows, a full bar, charger stations at each seat and bar-top electronic slot games. The chairs are set stadium-style to allow for unobstructed viewing.  The risk-management and trading operation, as well as the 12 sports betting kiosks, are powered by U.K.-based supplier Kambi Sports, which also powers DraftKings’ online sportsbook.

For the second time this week, DraftKings has announced the forthcoming opening of a physical sportsbook — this time where the post-PASPA U.S. sports betting expansion started, in New Jersey*.

“Construction is near completion on the DraftKings Sportsbook at Resorts, slated to open by late November 2018,” pending approval from the state’s Division of Gaming Enforcement. The Associated Press reports a more specific date — Tuesday, Nov. 20.  According to the AP, the sportsbook will be situated in an area where patrons can access it via an entrance off the Atlantic City boardwalk.

But wait, didn’t Resorts already open a sportsbook over the summer, branded Resorts, in conjunction with SB Tech? Indeed it did, but apparently there’s room for more than one operation to co-exist under the same roof, same as the digital arms for each property, which can implement up to three “skins” online.

Less than five months after New Jersey won the Supreme Court battle that allowed its casinos to offer sports betting, taxes are going up. According to the Press of Atlantic City, Governor Phil Murphy signed off on a 1.25 percent sports betting tax increase last week to benefit the state’s ailing Casino Reinvestment Development Agency. That brings the tax on net sports betting revenue to 9.75 percent at brick-and-mortar sports books and 13 percent on mobile and online sports betting.

For comparison, Nevada taxes its sports betting revenue at 6.75 percent, West Virginia at 10 percent and Mississippi at 12 percent. Sportsbooks haven’t opened in Pennsylvania yet, but the rate there will be 36 percent, while Delaware and Rhode Island (which expects to open for sports betting next month) effectively pay more a more than 50 percent tax rate under partnership programs with their state governments.

The CRDA will earmark the funds for “marketing and promotion.” According to the Press of Atlantic City, the additional tax from casino sportsbooks will be used to market Atlantic City specifically while the additional tax revenue generated from Monmouth Park and the Meadowlands Racetrack will be funneled directly to the towns in which the tracks are located.

The new studio facilities will serve as the home for weekend morning shows featuring Lombardi and current VSiN host Jonathan Von Tobel. The programming, which will debut in the next few weeks, will kick off VSiN’s live weekend offerings at 10 a.m. ET on Saturdays and Sundays.

PlaySugarHouse.com has now launched an online sports betting platform for New Jersey sports bettors  significant in that it integrates the new sports wagering opportunity for state residents with its already operating online casino. This also makes the mobile/online sports betting platform the third available in New Jersey, on the heels of MGM’s Wednesday release of the Android version of its playMGM NJ Sports app through the MGM-owned Borgata in Atlantic City.

New Jersey gambling regulators had approved the site to go live Thursday morning and the company said it was taking sports wagers as of 6 a.m.

The SugarHouse Online Sportsbook & Casino is the first online sports betting site operated under the aegis of the Golden Nugget Atlantic City, which has an online and fully licensed affiliation with Philadelphia’s SugarHouse Casino. The site is operated by Rush Street Interactive (RSI), the SugarHouse parent company.  RSI is also partnered with the Malta-headquartered sports betting supplier Kambi, which previously helped launch the DraftKings Sportsbook, which on Aug. 6 was the first online sportsbook to go live in New Jersey.

To read the rest of this story visit SportsHandle using the link below.

The post Bet365 Set to Join European Contingent In U.S. Sports Betting Market appeared first on SportsHandle.
Another major European online sports betting company, bet365, is attempting to join William Hill and Paddy Power Betfair/FanDuel in what is becoming a ferociously competitive and heavily European-influenced New Jersey sports betting marketplace.
According to a letter published on the New Jersey Division of Gaming Enforcement website, the newly opened Hard Rock in Atlantic City and bet365, with an estimated 23 million customers globally, are seeking to offer sports betting in the New Jersey resort city. The company, with headquarters in Stoke-on-Trent in England, would serve as both risk manager and betting platform provider.
The correspondence indicates two parties first signed a letter of intent back on June 19, however, neither concern has commented on the proposed deal. State officials signed off on a portion of the partnership in late June, but the temporary approval is valid only until July 31 while bet365 works to obtain its license to operate in New Jersey.

The sports betting deal would be the first in the U.S. for bet365, however, the company is a major worldwide brand with betting lines currently posted on an impressive variety of sporting events including upcoming NFL and NCAA football games. In addition to sports betting, bet365 offers customers in legal markets, online poker, casino, games, and bingo, and video streams on sporting events.
The Hard Rock Atlantic City also launched its first online casino gambling site this week. Online sports betting in New Jersey is expected to be available at the location in the next few weeks. The earliest any casino can offer sports betting is July 11, or 30 days after Governor Phil Murphy signed the enabling legislation.
The Seminole Tribe of Florida own and operate the Hard Rock Atlantic City. There was industry speculation that because the Seminole’s owned the naming rights to the Miami Dolphins’ stadium, it might be prohibited from offering sports betting. The $250 million, 18-year contract, that started in 2016 remains confidential, but it appears any issues regarding offering sports betting in Atlantic City and online throughout New Jersey by the Hard Rock are now resolved.

New Jersey is currently home to operating sportsbooks at Monmouth Park in Oceanport (William Hill), Ocean Resort Casino in Atlantic City (William Hill) and The Borgata in Atlantic City (MGM International).
The sportsbook operation at The Meadowlands racetrack in East Rutherford will be run by Paddy Power Betfair/FanDuel and open July 14, a day earlier than previously announced.
The Golden Nugget in Atlantic City has partnered with Churchill Downs Incorporated (CDI) to run its Atlantic City sportsbook operation. It was initially announced that it would not open until 2019, but the high the level of competition in New Jersey may force an earlier opening, industry observers note. CDI has said it will be using a platform being specially developed for them by SBTech, another European company with worldwide offices and headquarters in Bulgaria.
SBTech also revealed this week it would also provide a betting platform and risk management service to Resorts Casino Hotel, also in Atlantic City. Daily Fantasy Sports operator DraftKings has a business arrangement with Resorts, but it’s unclear exactly how this will develop in light of the SBTech announcement.

Back in the 1800’s Horace Greely was credited with the popular phrase “Go West Young Man, Go West” when offering advice about going west to seek fortune and opportunity. If Horace Greeley were alive today and were offering advice to those interested in the business of sports wagering, I suspect, and would bet serious dollars, he would modify his famous quote and post to a Twitter account: “Go East Young Bookie, Go East!”

As jurisdictions on the east coast of the United States embrace and welcome full on sports wagering it will only be a function of time before the national and international gaming operators wake up and realize, no different than the stock market, they will need their line makers and risk managers for their sportsbook operations to be based on the east coast or else start making those folks get into their Las Vegas offices by 5 a.m.

Consider this simple reality: there are nearly 60 million people and the highest concentration of professional sports in the north east United States, and those bettors are not likely to want to wait until 11 a.m. or noon on the east coast to start getting their bets down.

Please click here to read the remainder of the column at Gaming Today.